US Embassy in Kiev

The US dollar strengthened slightly against major currencies today as the Euro fell in Asian trade as stock markets were nervous of tensions in Ukraine and a possible more aggressive rise in the Federal Reserve's (Fed) reference rate this week.

At the moment, the European Union does not plan to withdraw the families of its diplomats from Ukraine, EU High Representative for Foreign Affairs and Security Policy Joseph Borrell was quoted as saying by Reuters.

Australian authorities have advised citizens to refrain from traveling to Ukraine and Australians who are there to leave as soon as possible. This was announced on Monday by the Ministry of Foreign Affairs of the Australian Union, quoted by TACC.

Britain has begun withdrawing its diplomatic staff from the embassy in Ukraine amid warnings that the Russian military could invade the country with very short notice.

According to the BBC, officials have explained that there are no specific threats against British officials, but still about half of them will return home.

NATO allies are sending more warplanes and ships to strengthen NATO's presence in Eastern Europe, given the situation around Ukraine.

This is confirmed in a statement from the Alliance, following the deployment of more forces from individual countries in the defense union in recent days.

US President Joe Biden is considering deploying additional US troops, aircraft and naval forces to the Baltic states and Eastern Europe. Such information was published in The New York Times, citing sources from the US administration.

The US State Department has ordered the families of all employees of the US Embassy in Kiev to leave Ukraine amid fears of a Russian invasion, the Associated Press reported.

US military aid arrived in Ukraine on Friday night, the US Embassy in Kiev stated. The delivery is part of a package of defense aid approved in December and comes amid a gathering of Russian troops on the border with Ukraine.

Blinken immediately warned that Russia could carry out the attack "in a very short time".
"As you all know, in the last few months we have been engaged in an intensive focus on Ukraine due to the significant accumulation of Russian forces we saw near the Ukrainian border," Blinken said in a conversation with Ukrainian diplomats at the US Embassy in Kiev, Reuters reports. 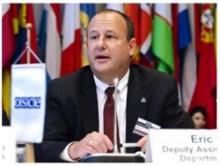 The Senate confirmed on Wednesdy Eric Seth Rubin as the new US ambassador to Bulgaria.

This was announced by the US embassy in Sofia in its Facebook profile.

The hearing of the nominee before the Senate Foreign Relations Committee was held on December 2., with US President Barack Obama having appointed Rubin in September.