According to the BBC, U.S. officials estimate that the Russian troops are so weakened by the fight that they are only able to make slow territorial progress.

President Joe Biden's special envoy for North Korea said Friday the United States is "preparing for all contingencies" in close coordination with its South Korean and Japanese allies as it monitors North Korean arrangements for a possible nuclear test explosion that outside officials say could be imminent.

The U.S. issued some of its starkest, most detailed warnings yet about how a Russian invasion of Ukraine might unfold, and its Western allies went on high alert for any attempts by the Kremlin to create a false pretext for a new war in Europe.

North Korea on Jan. 25 test-fired two suspected cruise missiles in its fifth round of weapons launches this month, South Korean military officials said, as it displays its military might amid pandemic-related difficulties and a prolonged freeze in nuclear negotiations with the United States.

Nearly two years into the COVID-19 pandemic, the origin of the virus tormenting the world remains shrouded in mystery.
Most scientists believe it emerged in the wild and jumped from bats to humans, either directly or through another animal. Others theorize it escaped from a Chinese lab.

US President Joe Biden is preparing a major diplomatic concession to prevent an escalation in the Russia-Ukraine crisis. A meeting between NATO and Russia, which he will try to convene, and other possible next steps will first be discussed with Ukraine and all allies in the Alliance, including Bulgaria.

They will discuss military tensions and other issues in Ukraine via a video link.
The U.S. President wants to talk with Putin about the deployment of Russian forces on the border with Ukraine, Reuters quoted an unnamed source from the American administration as saying, but also about strategic stability, cyber security and regional issues. 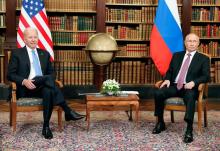 Presidents Joe Biden and Vladimir Putin will speak in a video call on Dec. 7, the White House and Kremlin said, as tensions between the United States and Russia escalate over a Russian troop buildup on the Ukrainian border that's seen as a sign of a potential invasion.