Although the new measures requiring a green certificate stimulate the vaccination process, Bulgaria is far from the coverage it needs to achieve.

The International Monetary Fund's (IMF) Governing Council has confirmed that it has full confidence in Managing Director Kristalina Georgieva, after examining allegations that during her time at the World Bank she pressured experts to change data in a way that would benefit China. , world agencies reported.

Lawyers who investigated World Bank data-rigging allegations against IMF Managing Director Kristalina Georgieva violated World Bank staff rules by failing to notify her that she was a subject of the probe and by not allowing her to respond to its findings, Georgieva's attorney said.

The World Bank has raised its gross domestic product (GDP) growth forecast for Turkey in 2021 to 8.5 percent.
In its July projection, the bank had pointed to an expansion of 5 percent, according to Europe and Central Asia Economic Update released on Oct. 5.

"Turkey's economy was one of the few to avoid a contraction last year, partly owing to substantial credit expansion.

The World Bank has raised its forecast for the development of the Bulgarian economy in 2021. Bulgaria's annual GDP is expected to grow by 3.7%. The previous forecast was for growth at the end of 2021 by 2.6%. But the bank emphasizes that the country's return to pre-crisis indicators will take place only in 2022. The expected annual inflation of 3.2% is unchanged.

Ljubljana/Brussels – EU leaders will gather in Brdo pri Kranju on Tuesday for a strategic debate on the EU’s international role in the light of developments in Afghanistan, the AUKUS security partnership and relations with China. On Wednesday, the Slovenian EU presidency will host an EU-Western Balkans summit, but no significant developments are expected. 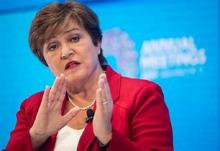 The International Monetary Fund boss, Kristalina Georgieva, is the victim of a plot to oust her, according to a Nobel prize-winning economist, after a report alleged that she applied "undue pressure" on staff to boost China's standing in global rankings while in her previous job at the World Bank.

An extraordinary meeting of the Group of 20 major economies to discuss Afghanistan will take place on 12 October, Italian PM Mario Draghi announced on Wednesday, Reuters reported.