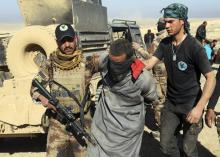 ISIL extremists are mounting increasingly bold attacks in Syria and Iraq following their loss of territory in both countries and are planning for the breakout of their fighters in detention facilities, U.N. experts said in a new report.

The terrorist organization needed a new leader after the assassination of the former one - Abu Bakr al-Baghdadi.

The organization also suffered a second defeat after the abolition of Abu Hassan al-Muhajir, an ID spokesman who would almost certainly have taken the lead.