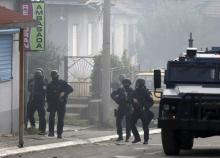 Namely, according to the media, that group sends exclusively reports to its headquarters, which are negatively intoned towards Serbs and the north of Kosovo. Such intelligence is also used as a cover for approving the actions of the Prime Minister of self-proclaimed Kosovo, Albin Kurti, through special units in the north of Kosovo. 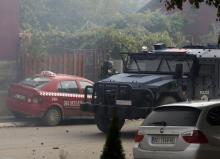 Police crackdown on smuggled goods has provoked clashes in northern Serbia, which is populated mainly by Serbs.

The police used tear gas against demonstrators who were angry at the action directed to District in Northern Mitrovica and burned police officers in Zverchan.

He pointed out that the prime minister of the so-called Kosovo, Albin Kurti, endangers Kosovo by taking rash actions, Gazeta Express reports.

According to the Pristina newspaper Lajmi, although several hours have passed since the Serbian and Kosovo sides signed the agreement, Osmani did not respond.

Today, she will meet with the Prime Minister of Serbia, Ana Brnabi, and participate in the launch of the project on the railway Corridor 10.
Von der Leyen arrived in Belgrade last night, and was greeted at the airport by President Aleksandar Vui, after which the two officials had talks at the "Mir" Villa.

"Kurti told the truth, Aleksandar Vui is the biggest problem of the false state of Kosovo," it is stated at the beginning of the statement that was forwarded to the media from the Ministry of the Interior.

he head of the European Union's executive branch on Wednesday called on Kosovo and Serbia to resolve their disputes through the dialogue and deescalate the recent tension over license plates.

European Commission President Ursula von der Leyen was in Kosovo's capital, Pristina, to meet with senior leaders as part of her regional tour before an EU-Western Balkans summit on Oct. 6. 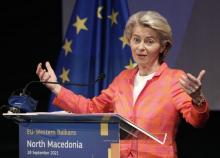 Von der Leyen will stay in Serbia for two days, while on Thursday she will meet with Serbian Prime Minister Ana Brnabic.
President of the European Commission began her Balkan tour with a visit to Tirana on Tuesday, ahead of the EU-Western Balkans Summit on October 6th. After Tirana, von der Leyen also visited North Macedonia.