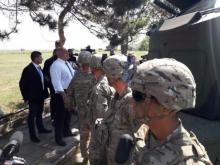 Prime Minister Boyko Borisov and senior military officers from the United States and Serbia are currently watching the battle firing of the tactical teaching "Shabla 2019".

The training includes air defense formations by the Bulgarian Army.

Opposition Leaders Dragan Dzillas and Bosko Obradovic, leader of the Dveri Party, were among the last out of the RTS building. Then the gathered tried to penetrate the building again, but the police pushed them with shields.