Former minister Fofi Gennimata was elected as socialist PASOK?s new leader on Sunday. Gennimata was one of three candidates in the election which saw some 50,000 party members casting their ballots across Greece. 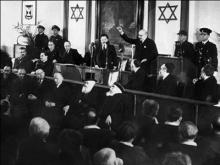 Greece had abstained in November 29, 1947, when the UN General Assembly voted to recognize the newly-born Jewish state. Greek governments continued with this policy until 1990. During this time, the Israeli envoy in Athens had the title “Diplomatic Representative” until Prime Minister Constantine Mitsotakis was elected as Greek PM. 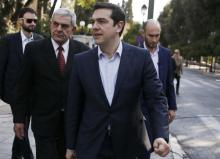 Where is the government going with its approach? Is it heading for a rift with Berlin and the other creditors or kicking up dust before it achieves a compromise? Why has it dramatically reopened, even with the involvement of the prime minister, the issue of World War II reparations? Four scenarios present themselves and hold the possible answer:

Looks like Greece and Germany are at war, for the third time in the space of a century. Or perhaps it?s a hoax. We?ll find out soon enough. Illogically, Athens and Berlin are competing in populism, with German Finance Minister Wolfgang Schaeuble and his Greek counterpart Yanis Varoufakis arguing with each other smugly.

Former Greek socialist PASOK finance minister Giorgos Papaconstantinou stands before the court at 9 p.m. on Wednesday over charges of allegedly tampering with the Lagarde list that contained the names of more than 2,000 affluent Greeks with cash deposits at a Swiss HSBC branch.

Rachil Makri, the former Independent Greeks MP who spent the last few months as a nonaligned lawmaker, was the surprise inclusion on Friday in SYRIZA?s list of candidates for the upcoming general elections.

Former Prime Minister George Papandreou did not surprise anyone by launching a new political movement three weeks before general elections. While the Papandreou clan has been known for leading developments and altering the Greek political stage, this may not necessarily be the case.