Prime Minister Kyriakos Mitsotakis is this week to meet with his two conservative predecessors, Antonis Samaras and Costas Karamanlis.

The meeting with Samaras is to be held in Mitsotakis' office in Parliament at 6 p.m. on Monday and that with Karamanlis is scheduled for Wednesday afternoon. 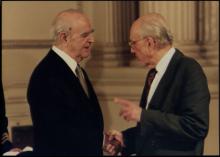 The electoral spread between the two top parties is near record level, especially If the opinion polls - which are reminiscent of older elections when two-party predominance was so great that the country was divided into blue (ND) and green (Pasok) cafes - are confirmed.

Back in 1974, New Democracy won the general election by a 20 percentage point spread over Pasok.

The government official that supposedly influenced the investigation of alleged bribes paid by Novartis to politicians is Alternate Justice Minister Dimitris Papangelopoulos, former conservative premier Antonis Samaras claimed in an interview with the Parapolitika newspaper that was published on Saturday.

In a new twist in the ongoing probe into the Novartis case, Deputy Supreme Court Prosecutor Ioannis Angelis submitted a report to the court's prosecutor's office calling for the reopening of three criminal lawsuits filed by three prominent politicians who were implicated in the alleged bribery investigation.

The outcome of Sunday's triple elections is a "victory for Greece," former conservative prime minister Antonis Samaras said after official projections showed opposition New Democracy firmly in the lead in polls for European Parliament and regional and local government.

German Chancellor Angela Merkel had proposed a temporary Greek exit from the eurozone during a meeting with conservative Prime Minister Antonis Samaras in August 2012, the ex-PM told Skai in an interview aired on Thursday night as part of the channel's series "Greek Bankruptcy."

A group of unknown individuals smashed the windows of a New Democracy offices in the southern Athenian suburb of Ano Glyfada on Wednesday night, amid a spate of attacks by anarchists against policemen and other targets.

Self-styled anarchists clashed with police guarding an event in Athens where former conservative prime minister Antonis Samaras and other New Democracy lawmakers were in attendance.