The SANA news agency affiliated with the Assad regime said: "At 20:25 of March 31, the Israeli warplanes launched a number of missiles, from over Lebanon, into the direction of eastern Homs. 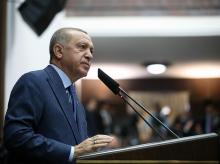 Turkey will respond heavily if the cease-fire with Russia is violated in northwestern Syria's Idlib, President Recep Tayyip Erdoğan said on March 11.

If the relevant parties of the Moscow deal violate the deal, Turkey will "never avoid going over them heavier than before," Erdoğan said at the parliamentary group meeting.

However, Russia's attack has compromised Erdogan's attempt to portray Turkey as a regional power. In addition, Arab countries have joined the US policy in Syria and have left Erdogan out in the cold.

Turkey's presidential spokesman has called on the European Union on March 10 to take concrete steps and fulfil its promises.

"Turkey fulfilled its responsibilities within the March 18 Turkey-EU agreement," Ibrahim Kalın said on Twitter, referring to the 2016 deal between the EU and Turkey.

The first trial of suspected members of Syria's Bashar al-Assad's security services for crimes against humanity, including torturing and killing opposition activists, will start next month, a German court said on March 10.

Opposition İYİ (Good) Party leader Meral Akşener has criticized President Recep Tayyip Erdoğan for a March 5 cease-fire deal agreed between Ankara and Moscow, suggesting it was Russia that gained an advantage in Idlib province of Syria.

Devlet Bahçeli, the leader of the Nationalist Movement Party (MHP), welcomed the March 5 cease-fire deal for Idlib between Russia and Turkey but warned that Ankara should hit back if the regime violates the truce. 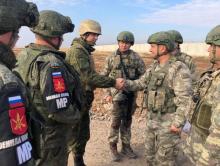 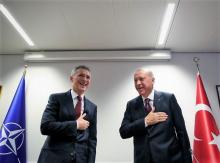 Turkish President Recep Tayyip Erdoğan on March 9 called on NATO members to show their alliance with Turkey "at this critical time."

"NATO is in a critical period in which it should clearly show the alliance's solidarity [with Turkey]," Erdoğan told reporters during a press conference alongside NATO Secretary-General Jens Stoltenberg.

Turkish and Russian military delegations will launch talks on March 10 in Ankara on the specific parameters of the functioning of the security corridor 6 kilometers deep to the north and 6 km deep to the south from the M4 highway in Idlib.