A bomb attack on an army bus in Damascus killed at least 13 people on Oct. 20 in the bloodiest such attack in years, the SANA state news agency reported.

"A terrorist bombing using two explosive devices targeted a passing bus" at a key bridge in the capital, the news agency said, reporting an initial casualty toll of 13 dead and three wounded.

Russia is "determined" to continue close cooperation and coordinated work with Turkey on diplomatic and military lines to fully normalize the situation in Syria, the country's Foreign Ministry said on Oct. 7.

The Syrian settlement traditionally occupies one of the central places in dialogue between Moscow and Ankara, Maria Zakharova told a news conference in Moscow.

Russian President Vladimir Putin had a meeting with his Syrian counterpart Bashar al-Assad at the Kremlin where they discussed the political situation in Syria, international terrorism as well as issues of bilateral and humanitarian cooperation. The details about the meeting held on September 13 were published on the Russian leader's website on Tuesday.

Russian President Vladimir Putin is self-isolating as a precaution after several members of his entourage fell ill with COVID-19, but is "absolutely" healthy and does not have the disease himself, the Kremlin said on Sept. 14. 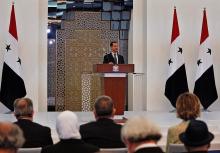 President Bashar al-Assad took the oath of office for a fourth term in war-ravaged Syria on July 17, after officially winning 95 percent of the vote in an election dismissed abroad.

It was the second presidential poll since the start of a decade-long civil war that has killed almost half a million people and battered the country's infrastructure.

Turkey's vice president urged the EU on July 6 to open legal migration routes for Syrians as part of the fair burden and responsibility sharing principle.

Fuat Oktay also appealed for member states to activate the voluntary humanitarian admission mechanism with concrete commitments and to increase the settlement quotas for refugees.

Syrian President Bashar al-Assad has been re-elected for a fourth seven-year term in a presidential election on Wednesday dismissed by the opposition as a sham, news wires reported. Al-Assad won 95.1% of the valid votes, head of the Syrian parliament Hamoud Sabagh said. Some 78.6% of eligible voters cast ballots inside and outside Syria, Sabagh added at a press conference in Damascus.

Candidate for the post of President of the Syrian Arab Republic, Bashar al-Assad and his wife cast their votes at a polling station in the Municipality Council of Douma city in Damascus countryside.