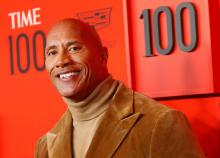 Wrestler-turned-movie star Dwayne Johnson clung to the top slot on the list of the world's highest-paid male actors for a second straight year, according to an annual tally released by Forbes magazine on Aug. 11.

Oscar-winning actor Casey Affleck has pulled out of this year's Academy Awards, his publicist has confirmed.

By tradition, Affleck - who won best actor for Manchester By The Sea in 2017 - would have been expected to present the best actress award this year.

The commercial was reportedly watched by around 188 million people around the world.

Turkey's flagship carrier Turkish Airlines have signed world renowned Hollywood actor Morgan Freemen as its new brand face to represent it in the U.S. as a part of a new advertisement campaign, the company announced on Jan. 19.

Freeman, who also has a private pilot's license, will appear in a commercial shot in Los Angeles slated to be aired on the Super Bowl Final on Feb. 5 night.

BELGRADE - The new film festival "Cinemafest" will be held at Belgrade's Sava Center from October 29 to November 2, and the audiences will have the opportunity to see features by famous authors and Hollywood stars, the organizers announced Tuesday.

The films were chosen by Ivan Karl and the new Woody Allen film "High Society" will open the festival.

"Batman v Superman: Dawn of Justice," the blockbuster superhero flick, leapt for a second straight week to the heights of the box office -- although with greatly diminished ticket sales, industry estimates showed on April 3.