"It was important for Yeltsin that Putin was of different generation because the country should not have been left to those who ruled it during the Soviet Union", former Kremlin Head of Administration Valentin Yumashev said during a public interview at the Yeltsin Presidential Center in Yekaterinburg.

"The agreement on friendship, cooperation and partnership between Ukraine and Russia will be abolished on April 1, 2019," TASS is reporting, citing the proposal.

The agency said 277 deputies voted to support the decision that needed 226 votes to pass.

Independent - Roman Abramovich has apparently been caught up in a government crackdown on people applying for investor visas and the Chelsea Football Club owner is unable to enter Britain because his is yet to be renewed. 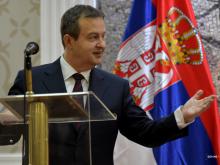 Vladimir Putin awarded Ivica Dacic, Serbian foreign minister and the leader of the Socialist Party of Serbia, with the Order of Friendship, a state-awarded honour given to foreigners for their contribution to strengthening friendship and cooperation with Russia.

Boris Yeltsin's Russia was one of the first countries to recognize the southernmost state to split from Yugoslavia as "Republic of Macedonia." The Kremlin's stance back then was dictated by the misguided impression that it could revive the pan-Slavist policy of the tzars.

“The decision is made,” reads the text Ksenia Sobchak is due to deliver on Russian TV. “Enough silence, I’ve thought about it for months… I intend to be the candidate for those who want to vote against everyone.”

Russia has awarded a Turkish businessman for his efforts in the normalization of ties between Ankara and Moscow after a major row between the two sides last year.

Russian President Vladimir Putin granted the Order of Friendship award to Turkish businessman Cavit Çağlar on May 26 with a decree he signed.

The award was given to a Turkish citizen for the first time.

Russian Ambassador to Croatia, Anvar Azimov, summoned to a meeting Zvonko Zubak, Croatian businessman who deals in trafficking of arms, in order to ask him where are missing missiles from rocket system S-300, which Russia delivered to Croatia in the first half of the nineties, claims Croatian daily "Vecernji list", without citing sources.