This has been announced by the state secretary in the Ministry of Economy, Branimir Stojanovic, who spoke for RTS on the occasion of the recent, for the first time organized placement of products from Kosovo and Metohija in central Serbia. 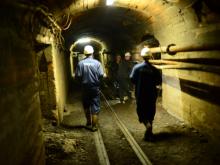 Kosovo's parliament on Friday is to start debating the draft law on transforming the Trepca mining and industrial processing complex into a shareholding company.

The debate starts almost two years after the government withdrew the draft law from parliament due to opposition protests.

Kosovo's Deputy Prime Minister Branimir Stojanovic condemned on Sunday in the strongest terms the desecration of the Christ the Savior Cathedral in Pristina.

The Serbian Orthodox church was desecrated by a group of protesters during Saturday's opposition riots in that city. 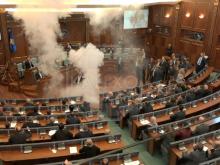 A session of parliament in Kosovo had to close after opposition MPs hotly opposed to Kosovo's EU-brokered deals with Serbia, threw tear gas canisters in the chamber, causing at least one MP to pass out.

Kosovo Deputy Prime Minister Branimir Stojanovic says he is satisfied that amendments that will pave the way to establish a special court have been adopted.

"Of course we're satisfied, it was uncertain until the very end. Until the last moment we did not know whether we will have enough votes," he said. 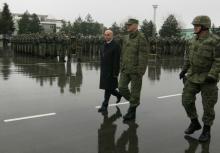 Kosovo's Serbian Deputy Prime Minister, Branimir Stojanovic, on Thursday said the formation of a Kosovo Army remained "unacceptable" for the Serbian community, adding that Serbian representatives in parliament, himself included, will vote against its formation.

He made this assertion also on Wednesday during a session of government where this issue was being voted on.

Branimir Stojanovic, who serves as deputy Kosovo prime minister, has said that creating "the Armed Forces of Kosovo would be unacceptable to the Serb people"

GRACANICA - Kosovo Deputy Prime Minister Branimir Stojanovic warned on Tuesday that the latest proceedings in Kosovo-Metohija (KiM) can jeopardise the survival of Serbs and added that the only solution lies in the constitution of the Community of Serb municipalities. 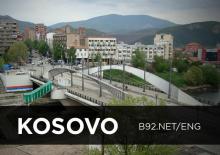 "Respect of coalition agreement only condition"

KOSOVSKA MITROVICA -- Respect of the coalition agreement remains the only condition for return to Pristina institutions, Serb representatives have said.

They on Friday held a meeting with Director of the Serbian government Office for Kosovo and Metohija Marko Djuric.

KOSOVSKA MITROVICA - Respect of the coalition agreement remains the only condition for return to Pristina institutions, representatives of the Serb community in the Kosovo government and parliament said at the meeting with Director of the Serbian government Office for Kosovo-Metohija Marko Djuric.