U.S. actor Alec Baldwin said on Oct. 30 in his first public comments on his fatal shooting of cinematographer Halyna Hutchins with a prop gun on a movie set that the tragedy was a "one in a trillion episode." 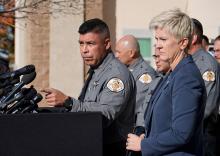 As questions linger about safety protocols on the movie set where Alec Baldwin killed a cinematographer with a prop gun he'd been told was safe, Hollywood professionals say they're baffled by the circumstances and production crews have quickly stepped up safety measures.

Hours before actor Alec Baldwin fired a fatal gunshot from a prop gun that he had been told was safe, a camera crew for the movie he was filming walked off the job to protest conditions and production issues that included safety concerns.