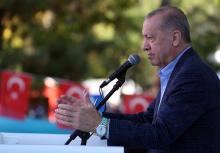 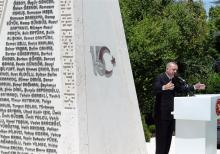 The repulse of 2016 coup attempt in Turkey is "a common source of pride" for the nation, the country's president said on July 15, marking the fifth anniversary of the defeated coup.

The Turkish Maarif Foundation on July 15 assumed the full administration of a school previously run by the FETÖ in Ethiopia's Oromia state after years of legal battle.

"Official handover of the school will soon follow after the conclusion of asset transfer," Levent Şahin, Maarif representative in Ethiopia, told Anadolu Agency.

Turkish President Recep Tayyip Erdoğan on June 9 stressed the importance of the fight against the FETÖ by Turkey and Kyrgyzstan.
"Recent events have once again revealed the bloody, dark, and ugly face of FETÖ. I hope we will overcome this threat together by standing shoulder to shoulder," Erdoğan said at a joint news conference with his counterpart from Kyrgyzstan Sadyr Japarov.

A Turkish court handed down lengthy sentences in a "football match-fixing case" involving a plot by the FETÖ from 2011.

The 23rd Istanbul Heavy Penal Court issued its final verdict to former chairman of Samanyolu TV (STV) Hidayet Karaca, who received a sentence of 1,406 years for "breaching the privacy of communications," "forgery of official documents" and "slander."

A Turkish court on April 18 concluded its reasoned decision on the assassination of Russian Ambassador to Ankara Andrey Karlov.

In a detailed verdict, the court reasoned that Mevlüt Mert Altıntaş, an off-duty police officer who killed the ambassador in 2016 at a time of the reconciliation of Turkish-Russian relations, was a secret member of FETÖ.

Turkey's Supreme Court of Appeals on April 14 overturned a decision on journalists Ahmet Altan and Nazli Ilıcak, who were given jail time for links to the FETÖ.

Ilıcak had been sentenced to eight years and nine months and Altan had gotten 10 years and six months in prison for aiding the terror group, which was behind the 2016 defeated coup in Turkey

A Turkish court on April 7 handed down aggravated life sentences to several convicts for their involvement in the 2016 defeated coup in Turkey, according to judicial sources.

A defamation campaign advertisement by members of the FETÖ against Turkey has been removed in New York City after backlash from the Turkish community.

Hrant Dink, a prominent Turkish-Armenian journalist, was remembered on Jan. 19 14 years after he was assassinated.

Born in Turkey's eastern Malatya province in 1954, in 1996 Dink established the Agos newspaper in Istanbul, a publication that since has been published in both Armenian and Turkish. He also acted as the paper's editor-in-chief.