Raymond Hekking spent decades trying to convince the world that the Mona Lisa painting he bought from a French antique shop in 1953 was the real thing and the one in the Louvre Museum was a fake.

Now Christie's auction house has put the "Hekking Mona Lisa" up for sale, hoping the story of his campaign to realize his dream will help compensate for the fact it is a copy.

Without Turkey, Europe just doesn't look right and in the long run it probably won't work.
The idea of Turkey as an active player in the life of Europe is a relatively new one for people in Europe. Because Turkey industrialized much later than most of the countries on the north side of the Mediterranean, it was for many years just a bystander.

Turkish President Recep Tayyip Erdo?an has said Russian President Vladimir Putin used to call him "brave and bold," before the two countries' relations soured over Turkey's downing of a Russian fighter jet near the Syrian border on Nov. 24.

Prime Minister Alexis Tsipras responded to comments made by interim New Democracy party leader Vangelis Meimarakis in Greek Parliament during a three-day debate the government’s policy statements culminating with a vote of confidence at dawn on Thursday. Tsipras said that the country needs constructive criticism from the opposition parties, not sterile contradiction leading to nowhere.

A senior EU official on Sept. 19 spelt out plans to encourage people fleeing war in Syria to stay in bordering countries rather than join the flow of migrants to Europe.

In a visit to a migrant reception centre on the Macedonian border, European Commissioner Johannes Hahn said the European Union faced several tasks.

European Council President Donald Tusk said that now was “the most critical moment in the history of the eurozone” as Greece was given until Thursday to present new proposals to secure a deal with creditors. “The final deadline ends this week,” said Tusk after emergency talks in Brussels on Tuesday.

Athens optimism for a deal by Sunday was questioned by its international creditors (European Commission, European Central Bank and International Monetary Fund) at the G7 summit in Dresden, Germany, who warned that more work must be done.

The fighting between government forces and separatists in eastern Ukraine has flared up again despite attempts to ease the tension through a cease-fire agreement, signed in Minsk on Sept. 5, 2014. After a December lull, the separatists renewed their attacks with not-so-hidden Russian support, pushing the country into a deeper chaos. 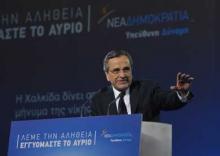 Prime Minister Antonis Samaras is expected to change the focus of his election campaign on Saturday, when he is due to present his party?s economic strategy after concentrating on Wednesday on SYRIZA?s stance on law and order as well as immigration.