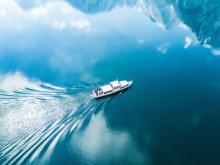 Koper – After 26 years of service, Slovenia’s oldest police boat made its final voyage off the Koper coast on Wednesday. It will now be consigned to a museum.

Built in Italy in 1994, the P-111 boat embarked on its maiden voyage in June the following year. It has been used to patrol Slovenian waters and the border and has been involved in many a rescue operation at sea.