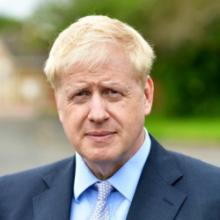 The British Prime Minister is expected to announce that Britain is not ready to delay Brexit.

Margaritis Schinas, who was nominated to serve as a European Commission vice president "for protecting our European way of life" by EC President-elect Ursula von der Leyen earlier this week. has been lauded by Politico as "one of the most prominent and well-liked members of von der Leyen's new team."

The European Parliament's president said Thursday that he will meet with incoming European Commission chief Ursula von der Leyen later this month to discuss her contentious decision to nominate a commissioner responsible for "protecting our European Way of Life."

Among others, there's former Hungarian Minister of Justice Lszl Trcsnyi, who will be appointed new European Commissioner for European Neighbourhood Policy and Enlargement Negotiations, replacing Johannes Hahn on that position.

For Bulgaria, the name of Commissioner Maria Gabriel is confirmed.

Newly-elected European Commission President Ursula von der Leyen has announced that she has approved the list of proposals for new commissioners to submit to the European Parliament, BTA reported.

The European Commission has said that the European Union is ready for Brexit without a deal and that such a variant would most likely hurt the UK, Reuters reported.

The Commission does not currently consider it necessary to take any further steps to prepare for such a scenario, EC spokeswoman Natasha Bertaud said at a briefing.

Commission spokesperson said Juncker had a successful and an urgent cholecystectomy over the weekend and doctors advised him not to take a trip.

Margaritis Schinas, the current chief spokesperson for the European Commission, said he is honored to be nominated to represent Greece in the next college of commissioners, following a meeting with Prime Minister Kyriakos Mitsotakis on Friday.

European Commission President Jean-Claude Juncker has accepted the resignation of Secretary-General Martin Selmayr, a spokesman for the institution said today.