China and the United States on Nov. 10 vowed to work together to accelerate climate action this decade, separately announcing a surprise pact on global warming, which is already causing disasters across the world.

Fatih Birol, the head of the International Energy Agency (IEA), has been named one of the most influential 100 persons of 2021 by Time, a political magazine based in New York City, United States.

Birol, 63, who has been the executive director of the agency since 2015, is the only Turkish person that made it to Time's annual influencer list this year.

Turkey's environment and urbanization minister on July 25 said that urgent measures to reduce the amount of emission and carbon footprint were discussed at a meeting of environment ministers of G20 in Italy.

Turkey's Environment and Urbanization Minister Murat Kurum has urged the U.S. envoy for climate to exclude Turkey from the Annex-I list of the United Nations Framework Convention on Climate Change (UNFCCC) and receive a fair financial support to implement the convention.

Russia and the United States have embarked on resuming climate cooperation, with Russian Presidential Climate Advisor Ruslan Edelgeriyev having held his first meeting with US Special Presidential Envoy for Climate John Kerry. Climate protection remains one of the few promising areas for cooperation between the two superpowers, Kommersant writes.

Last week's attempted coup by strident supporters of President Donald Trump sullied America's image in the world, and it also drowned out other significant news regarding American foreign policy during the Biden administration.

The incoming administration of US President-elect Joe Biden is very much a female affair in the crucial areas of communications and financial management. Among the all-female White House communications team named recently, moreover, Biden has chosen Jen Psaki for press secretary.

Donald Trump has accepted a formal US transition should begin for President-elect Joe Biden to take office.

The president said the federal agency overseeing the handover must "do what needs to be done", even as he vowed to keep contesting his election defeat.

The General Services Administration (GSA) said it was acknowledging Mr Biden as the "apparent winner". 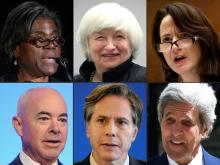 President-elect Joe Biden on Nov. 23 announced a foreign policy and national security team crammed with veterans from the Barack Obama years, signaling an end to the upheaval under President Donald Trump and a return to traditional U.S. diplomacy.