He spoke about an incident in which protesters shouted in front of his apartment that he was Ustasha and compared him to the Nazi doctor Josef Mengele.

One of the last Romanian-born survivors of Nazi doctor Josef Mengele's infamous experiments on Holocaust camp victims has died in Poland.

Eva Mozes Kor died aged 85 in Krakow, where she was on an annual educational trip with the institute she founded in 1995 to "prevent prejudice and hatred" by sharing her experience in the Nazi camps. 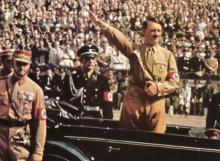 SmithsonianMag - On April 30, 1945, as Allied forces converged on the capital of Nazi Germany, Hitler killed himself inside his Führerbunker. Days later, his remains were captured by the Red Army and were subsequently locked behind the Iron Curtain for decades. 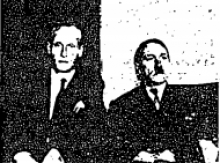 The US investigated whether Hitler was alive in South America as late as 1955, newly-declassified CIA documents reveal.

The official files show a former SS soldier told spies he regularly met with the Nazi leader in Colombia.

It goes on to suggest that Hitler, who would have been aged 66, worked as a shipping company employee before fleeing to Argentina.

In a hidden room in a house near Argentina’s capital, police believe they have found the biggest collection of Nazi artifacts in the country’s history, including a bust relief of Adolf Hitler, magnifying glasses inside elegant boxes with swastikas and even a macabre medical device used to measure head size.

Ruins discovered in an area of Argentina are believed to have been a Nazi hideout, built by the Third Reich so their people could hide in it if the war were to go awry.

Researchers are studying three buildings in the north of Argentina near the Paraguay borders.