Slovenia has a rich underground world with caves large and small dotting the country. They have attracted cavers, visitors and researchers from near and afar for centuries, but also people who used them as a handy way to dump their waste. As a result, 20-30% of Slovenian caves are now thought to be polluted and cleaning them is a major challenge.

Čatež ob Savi – The Slovenian teams competing in the European Team Chess Championship got off to a mixed start to the competition on Friday, with the men’s team defeating Ireland and the women’s team surprisingly losing to Belgium.

The men’s first team, ranked 19th, defeated the much lower-ranked Ireland 3.5:0.5 as Jure Borišek was the only one to cede half a point.

Ljubljana – Ljubljana Mayor Zoran Janković entered a not guilty plea at an arraignment hearing at the Ljubljana District Court on Friday in a case of tax evasion concerning the sale of retailer Mercator shares in 2006. His two sons also pleaded not guilty as well but they did not attend the hearing. 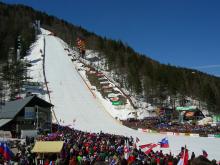 Planica – The world’s top ski jumpers will converge on Slovenia’s Planica this week for the Ski Flying World Championships, which has been moved up from March due to the Covid-19 epidemic. The event will be held for the first time without spectators, under floodlights, and under strict anti-epidemic rules.