Opposition political parties have pledged to contribute to Turkey's ongoing efforts to curb the spread of the coronavirus, with calls on parliament to set up a commission to support the medical teams' works across the country, as one person died due to the pandemic, while 98 others are currently infected.

A "permanent ceasefire" in the northwestern Syrian province of Idlib is essential "as soon as possible," according to Turkey's main opposition Republican People's Party (CHP).

"We lost our heroes outside our borders. Why did we lose them? We are waiting for a reasonable answer," CHP spokesperson Faik Öztrak told a press conference in Ankara. 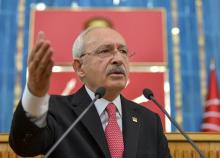 Speaking during the parliamentary group meeting of the CHP, Kılıçdaroğlu asked Erdoğan to convey his questions to Putin.

The Turkish Parliament is set to convene in a closed session to discuss the developments in Syria's northwestern Idlib province as the exchange of fire continues to escalate tensions between Ankara and Damascus.

The General Assembly will convene at 3.00 p.m. local time (1200GMT) for its usual weekly works which will be followed by the closed session.

Turkish political parties on Feb. 28 extended condolences to the nation over loss of lives of Turkish soldiers in an airstrike by the Bashar al-Assad regime forces in Idlib, northwestern Syria.

The "murderer regime" in Syria and those who encourage it will pay the heaviest price for their treachery, Turkey's ruling party spokesman said.

Turkey's main opposition Republican People's Party (CHP) leader Kemal Kılıçdaroğlu has said he does not expect early elections would be called, because "no such decision will be made in parliament" due to the "one-man rule."