Galatasaray on Oct. 31 beat Gaziantep FK 2-0 in a Turkish Spor Toto Süper Lig match for a valuable victory as their archrivals Beşiktaş and Fenerbahçe suffered defeats each in the same week.

The visitors were quite disciplined in defense after the kickoff in Istanbul's Nef Stadium as the Lions managed to break the deadlock just before the break.

Turkish side Fenerbahçe were held to a 2-2 draw by Antwerp on Oct. 21 in a Group D match of the Europa League.

Mbwana Samatta found an early goal for Antwerp in minute two at the Şükrü Saraçoğlu Stadium in Istanbul.

Fenerbahçe leveled the game with a goal by Enner Valencia in the 21st minute, but Valencia later missed a penalty shot in minute 37.

Turkey managed a 1-1 draw on Oct. 8 against Norway in a 2022 FIFA World Cup qualifying group match in Istanbul.

Turkish winger Kerem Aktürkoğlu scored the opening goal in the sixth minute after his team's pressure on Norway's defense at Istanbul's Ülker Stadium.

Aktürkoğlu was assisted by Cengiz Ünder.

Galatasaray beat GZT Giresunspor 2-0 in a Aug. 16 Turkish Süper Lig match to make a good start to the 2021-22 football season.

Galatasaray eliminated Scotland's St Johnstone with a 5-3 aggregate score on Aug. 12 to advance to the UEFA Europa League playoffs.

In a third qualifying round second leg game, Mbaye Diagne scored the opener for the Lions in the 30th minute at McDiarmid Park stadium in Perth, Scotland. 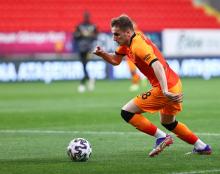 The Lions' young winger Kerem Aktürkoğlu scored a hat-trick in his team's 3-1 win against Göztepe in the Turkish Süper Lig clash on April 17.

Fousseni Diabate broke the deadlock in the eighth minute for the home side but Galatasaray came back from 1-0 down with Aktürkoğlu's two goals in the first half.

Galatasaray on April 10 disappointed fans with a 1-1 home draw in a Turkish Süper Lig match against Fatih Karagümrük as the Lions' hopes for a local title are fading rapidly. 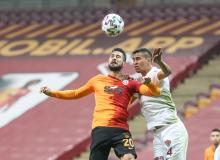 The first half ended with a 1-0 score.

In minute 64, Hatayspor defender Pablo Santos scored an own goal as the Lions doubled the lead.