İYİ (Good) Party leader Meral Akşener on April 7 reiterated her criticism towards a declaration by 104 retired admirals, saying that the statement worked for the government to divert public attention from problems of the country.

A Turkish opposition leader on March 31 criticized the president over frequent changes in the Central Bank leadership.

"They do not have any concerns about protecting women or our children. Their only priority is to protect their seats. The Istanbul Convention keeps alive," she said, addressing her party members at the parliament.

İYİ (Good) Party Chair Meral Akşener has vowed to continue her fight unshakably to promote women's right in every field of life.

"I will never quit my struggle even if death awaits me at the very end and I am left alone. This is the promise of a Muslim Turkish woman," Akşener told her parliamentary group on March 10 as she devoted her weekly address to International Women's Day.

Rasim Öztekin, a beloved Turkish television, theater and movie actor, passed away on March 8 at the age of 62.

"He was a family member in every home with a television," Koca said. 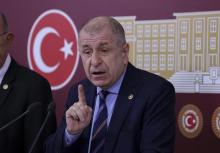 The İYİ (Good) Party will not automatically vote in favor of the removal of the immunities of the parliament members from the ranks of the People's Democratic Party (HDP), İYİ Party Chairwoman Meral Akşener has said, stressing that her party would advocate the truth and not support a political show. 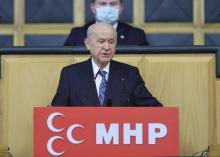