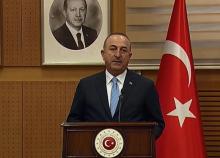 Reconciliation between the Syrian regime and the opposition groups is essential for ending the ongoing civil war in the country, Türkiye's top diplomat has said, repeating Ankara's calls on Damascus to genuinely endorse the international efforts for a political solution to the decade-old tragedy.

Nationalist Movement Party (MHP) leader Devlet Bahçeli has given support to the recent statement by Foreign Minister Mevlüt Çavuşoğlu, who expressed the necessity to establish peace between the Syrian opposition and the regime.

Six people, who tried to desecrate a Turkish flag during demonstrations against Türkiye in the northern Syrian province of Jarabulus, have been detained, İhlas News Agency has reported.

According to the report, "provocateurs" caused an uprising in the city on Aug. 11 and tried to take a Turkish flag down, following statements by Türkiye's top diplomat Mevlüt Çavuşoğlu.

Türkiye has been the country that has made the most effort to find a solution to the crisis in Syria in line with the legitimate expectations of the people since the beginning of the Syrian conflict and continues to work in this bid, the Foreign Ministry said.

Ankara – President Borut Pahor started a two-day state visit to Turkey on Tuesday, meeting Turkish Foreign Minister Mevlüt Cavusoglu in Ankara. The pair talked above all about the war in Ukraine and its consequences for the Western Balkans. Pahor also raised this point as he addressed the annual meeting of Turkish diplomats.

Ankara – President Borut Pahor will start a two-day state visit to Turkey on Tuesday at the invitation of his Turkish counterpart Recep Tayyip Erdogan. Bilateral relations and the situation in Ukraine will top the agenda. The situation in the Western Balkans and the Middle East will also be discussed.

The Ukrainian war has enabled EU countries to reopen their eyes to the realities of the world, Turkish Foreign Minister Mevlüt Çavuşoğlu has said, stressing that European security needs Türkiye, and therefore, Ankara has set focus on Europe again.

"The president's visit to Tehran is being planned for July 19," Kremlin spokesman Dmitry Peskov said on July 12 adding that the trio would meet for Syrian peace talks.

Multilateralism should be kept protected by avoiding bilateral acts in foreign policy, Türkiye's top diplomat has said, citing the Russian invasion of Ukraine as a very bad example of bilateralism.