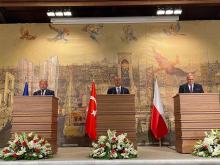 NATO allies should encourage Finland and Sweden to take concrete steps regarding Turkey's concerns about the "support given to terror groups," Foreign Minister Mevlüt Çavuşoğlu said on May 27.

The minister reminded that Turkey's opposition to Finland and Sweden's NATO bid is due to their "support to terrorist organizations." 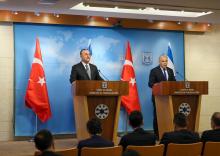 Turkey and Israel have decided to continue their bid to normalize their relationship through dialogue and technical contacts, particularly in the areas of economy and trade, the two countries' foreign ministers have said, adding a new framework is agreed to be established for the future of the bilateral ties.

Turkey has called on Sweden and Finland to give concrete assurances in their fight against terrorism, particularly the PKK and its Syrian offshoot YPG, if they want to join NATO. The message was delivered to the Nordic states at a three-way meeting in the Turkish capital Ankara on May 25.

Russian Ambassador to Turkey Aleksei Erkhov has highlighted the importance of Turkey's mediation role between Ukraine and Russia, expressing hope that peace talks between the two warring parties will soon yield results.

The special representatives of Turkey and Armenia held the third round of normalization talks in Vienna on May 3 and agreed to continue the negotiations without preconditions, the Foreign Ministry has said. 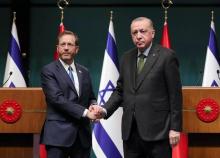 Turkey's top diplomat, Mevlüt Çavuşoğlu, will go to Israel to hold talks on the normalization of the bilateral ties on May 25, in a first senior-level visit in years.

Foreign Minister Mevlüt Çavuşoğlu has strongly criticized Germany for its reaction over the Kavala case, accusing the prominent European nation of interfering in the internal affairs of Turkey.

The special representatives from Turkey and Armenia will hold their third in-person meeting next week as part of an ongoing mutual bid to establish diplomatic ties between the two neighbors, the Foreign Ministry has said.

Turkey has closed its airspace to Russian civilian and military aircraft that carry troops to Syria, Foreign Minister Mevlüt Çavuşoğlu said on April 23.

Turkey and Russia have "agreed to suspend the use of the airspace for Russian military aircraft and even civilian aircraft carrying soldiers to Syria," Çavuşoğlu told reporters aboard his flight to Uruguay.