Christos Pappas of the now defunct far-right Golden Dawn party was no run of the mill cadre of former party leader Nikos Michaloliakos.

He was the self-styled "theoretician" of the group. Even "his own" people referred to him as [top Nazi Hermann] Goering and his parliamentary presence was marked by his outrageous audacity.

Christos Pappas, who was second in charge of the far-right Golden Dawn party, was arrested late on July 1 in Zografos, a suburb of the Greek capital Athens.

Pappas, who had been sentenced to 13 years in prison in October 2020 along with other senior members of the party for forming a criminal organization, had gone missing after the verdict.

A prosecutor has proposed that ll 17 former MPs of the far right Golden  party and over 40 others were acquitted for the September, 2013 murder of rapper Pavlos Fyssas after a four-year trial trial, by prosecutor Adamantia Economou.

The decision caused a strong backlash, as the prosecution presented a host of witnesses, documents, and digital evidence

Golden Dawn leader Nikos Michaloliakos and other high-ranking officials should be acquitted of charges of running a criminal organization, the prosecutor in the ongoing trial against the neo-Nazi party said on Wednesday.

It has been more than six years since Pavlos Fyssas was murdered and the government of Antonis Samaras decided to open a criminal investigation into the criminal activities of Golden Dawn. 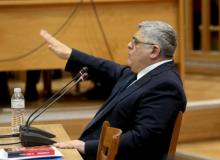 Golden Dawn leader Nikos Michaloliakos testifying in the Athens appellate court today said he had no involvement in the murder of anti-fascist rapper by Yorgos Roupakias whom he described as a lone ranger who killed Pavlos Fyssas of his own volition and that he was informed of the event the next day.

The head of Greece's extreme far-right Golden Dawn party testified in court on Wednesday for several hours as part of a long-running trial over the party's activities in which he and several former party lawmakers are accused of running a criminal organization.

More than four years since the launch of the criminal trial against Greece's neofascist Golden Dawn, party leader and founder Nikos Michaloliakos took the stand for the first time on Wednesday.
In his testimony, Michaloliakos denied charges of running a criminal organization that targeted migrants and leftists, denouncing the accusations as fake and politically-motivated.

The trial of Golden Dawn enters a key phase on Wednesday, when the neo-Nazi party's leader, Nikos Michaloliakos, takes the stand to respond to accusations of running what effectively constitutes a criminal organization.

The political trial of the extreme-right Golden Dawn continued Tuesday, with Christos Pappas, the party's number two, declaring that his "conscience is clear" and dismissing an old photograph of him and his young son performing the Nazi salute, saying they were "having a laugh."