Turkey has been and stays an important partner to Romania, both on political and economic ground, and this reality is also confirmed by the solid strategic partnership between the two countries, which is built on a close traditional friendship, Romania&#39;s ambassador to the Republic of Turkey, Gabriel Sopanda said in an interview with AGERPRES. 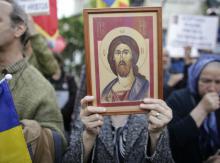 The Romanian Muftiyat, which represents Muslims in the country, has cancelled its project to build a showpiece mosque in the capital, saying the costs were too high.

The Muftiyat has filed a request to the Ministry of Culture to return the property assigned for the planned mosque to the Romanian government, Mufti Iusuf Murat said.

Prime Minister Viorica Dancila welcomed on Wednesday, at the Victoria Palace, Turkey&#39;s Ambassador to Romania Osman Koray Ertas, on a courtesy visit, a release of the Government sent to AGERPRES informs.

A Romanian court has ruled that a Turkish woman wanted in Turkey on alleged links to militants must remain in custody until her extradition hearing.

Nalan Oral, who has political refugee status in Belgium, was detained by Romanian border guards on July 8. Her lawyer Alin Speriusi-Vlad told the Associated Press on July 17 she was detained because her name appeared on an Interpol list.

The Turkish Cooperation and Coordination Agency (TİKA) stepped up its food aid to needy Turks, Tatars and Romanian Muslims over the weekend, state-run Anadolu Agency reported on June 18.

Five hundred packages of Ramadan food were distributed to low-income families in small towns and villages in the Dobruja region of the country.