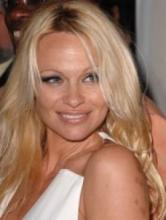 American actress Pamela Anderson urged more people to support Julian Assange after visiting the WikiLeaks creator in a London prison where he expects a hearing about the US request for extradition.

Pamela Anderson became the fantasy of many males in the 1990s when she starred in the TV series Baywatch. The blonde bombshell might be pushing 50, but it seems she has still got the looks.

Baywatch icon Pamela Anderson might be approaching half a century, but the blonde actress has still got it. At 49, the juicy bombshell shed her clothes for a new ad campaign for Coco De Mer’s Icons lingerie collection. The results of the photo shoot were incredible.

American actress, producer, author, activist and vegan Alicia Silverstone strips for the latest animal rights campaign of People for the Ethical Treatment of Animals (PETA), using her sensational body to get the message across: “Choose fake, for animals’ sake!”

Pamela Anderson is throwing it back to the ’90s for the new campaign of fashion retailer Missguided.

The 48-year-old actress and model is the face of the campaign, which itself is a part of the #babesofmissguided drive that aims to support and empower women.

Pamela Anderson posed recently nude for a good cause teaming up with Amelie Pichard on a brand-new vegan shoe line.

The sexy actress posed playfully in nothing but a big brunette wig and pair of white heels for Paper magazine.

Talking about the shoe line, Anderson said that vegan compassion is sexy and also revealed that she is not the designer of the range.

Just a curly brunette teenager, who would have thought that Pamela Anderson would grow up to become the most iconic bunny!

Aged just 21 years of age with a coming of age Playboy… just before her first boob job that took her from a 34D to a 34DD.

She says that she was chuffed to get a call from Hugh Hefner’s attorney who said: “We don’t want anybody else!”

The blonde bombshel had announced back in 2002 that she had contracted Hepatitis C. But, now Pamela Anderson is celebrating being cured of the disease.

The 48-year-old actress wanted to share her happiness with her friends on social media and posted a saucy snap on her Instagram page.