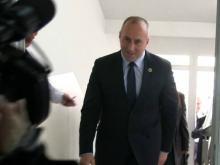 Two opposition parties in Kosovo, the Alliance for the future of Kosovo, AAK, and Nisma, have said they will go into the next elections under a joint nominee for the post of Prime Minister, AAK leader Ramush Haradinaj.

Ramush Haradinaj's brother and member of the Alliance for the Future of Kosovo Daut Haradinaj continued with threats saying that Belgrade should know that it will receive the same answer as in 1999 and that it should not play with Ramush Haradinaj.

US Senator John McCain will arrive in Belgrade for a meeting with Serbian Prime Minister Aleksandar Vucic.

Vucic announced this during a news conference on Sunday, and said he and McCain will speak "about the position of Serbia and Kosovo."

Member of Kosovo Assembly Daut Haradinaj, brother of the leader of Alliance for the Future of Kosovo and former Prime Minister Ramush Haradinaj, said that there will be not a Serb in Kosovo, if Ramush is extradited from France to Serbia.

The Court of Appeals in Colmar, France, on Thursday once again postponed its decision on Serbia's extradition warrant for Ramush Haradinaj for April 27.

Haradinaj, an ethnic Albanian politician in Kosovo and a former leader of the KLA ("Kosovo Liberation Army") is wanted in Serbia on charges of war crimes committed in Kosovo and Metohija in 1998 and 1999. 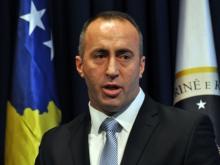 A French court postponed for the third time its decision on whether to extradite former Kosovo Prime Minister Ramush Haradinaj to Serbia, where he is wanted on war crimes charges.

The appeals court in Colmar, France will most likely postpone the decision on Serbia's extradition request for Ramush Haradinaj until a further hearing.

The court is set to meet on April 6.

Tanjug reported it was told this on Tuesday by the court's spokesperson Sandra di Rosa.

Kosovo Parliament adopted today a resolution demanding the unconditional release of Ramush Haradinaj and interruption of the dialogue with Belgrade until the request is fulfilled. 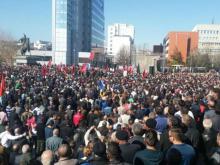 Thousands of people rallied in Pristina in support of former Kosovo Liberation Army commander and ex-prime minister Ramush Haradinaj, who was arrested in France on a Serbian war crimes warrant.

A French appeals court has postponed a decision on the possible extradition of former Kosovo Prime Minister Ramush Haradinaj, who was a UCK (KLA) commander during the 1998-99 Kosovo war.

The court has said a ruling on Haradinaj's extradition will be made on April 6.