"Why did Mitsotakis invite Haftar to Greece? Did he just want to provoke us?" an annoyed Recep Tayyip Erdogan said on his return from the Berlin conference on the Libya crisis regarding the meeting between Greek Prime Minister Kyriakos Mitsotakis and Libyan military commander Khalifa Haftar in Athens on Friday.

Italy on Tuesday dismissed Turkish claims that the country is allegedly negotiating with Ankara the terms for the exploitation of Libya's oil resources, describing them as "unfounded."

The intense anxiety of Turkish President Recep Tayyip Erdogan is not usual for a country leader, argued Greece's Alternate Foreign Minister Miltiadis Varvitsiotis on Tuesday. He also said there is no information on any cooperation between Ankara and Rome on hydrocarbons in the Mediterranean.

Members of the National Medical Rescue Team departed for Somalia's capital on Jan. 21 to bring those wounded in a suicide car bombing over the weekend back to Turkey.

At least three people were killed and 20 others injured, including several Turkish nationals, when a suicide car bomb targeted a police convoy escorting Turkish contractors in Mogadishu on Jan. 18.

Escalating the incendiary rhetoric directed at Athens, Turkish President Recep Tayyip Erdogan claimed again, after his return on Sunday from the Berlin conference on Libya, that the southern island of Crete does not have a continental shelf while also slamming Prime Minister Kyriakos Mitsotakis for receiving Libyan commander Khalifa Haftar in Athens last week.

If the geopolitical volatility in the Balkans before WWI led to its description as the powder keg or tinder box of Europe, today the same many be said of the Southeastern Mediterranean but on a more expansive geographic scale, drawing in the US.

Turkish President Recep Tayyip Erdogan said on Monday that Somalia had invited Turkey to explore for oil in its seas, after Ankara signed a maritime agreement with Libya last year, broadcaster NTV reported.

The way for the political process for settlement in Libya would be paved if the parties stick to the truce reached in the North African country, President Recep Tayyip Erdoğan said on Jan. 19.

On his return to Ankara from Sunday's Berlin conference on the Libya crisis, Turkish President Recep Tayyip Erdogan commented once again on the maritime zones that he purports have been delineated by a memorandum signed between Ankara and Tripoli in November. 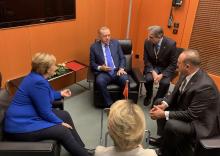 Turkey has assessed the results of the Berlin Summit as introducing an important opportunity for the cessation of hostilities in Libya and underlined that it will maintain its constructive and peaceful policy to this end.