Glasgow – Prime Minister Janez Janša highlighted the need to create a realistic path to implement the goals from the Paris climate agreement as he addressed the World Leaders Summit, a high-level political event held in Glasgow as part of the ongoing COP26 climate conference. 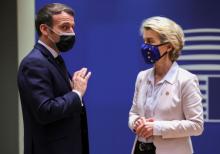 The EUMed 9 Summit will be held on Friday in Athens, at the Stavros Niarchos Foundation Culture Centre (SNFCC).

European Commission President Ursula von der Leyen will attend today's Med9 summit in Athens, where the leaders will focus their talks on climate change and environmental protection in the aftermath of Greece's disastrous wildfires that destroyed about 130,000 hectares in August during a heat wave.

The prime ministers of the four European Union countries on the frontline of the migration crisis, namely Greece, Italy, Spain and Malta, on Wednesday sent a joint memorandum outlining their positions on the bloc's new Pact on Migration and Asylum to the German chair of the European Council, Angela Merkel, European Council President Charles Michel and European Commission President Ursula von de