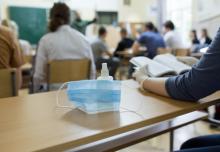 He said that official information on the teaching models for next week will be published on Thursday.
He said that the desire to prepare the school system in the right way is due to the epidemiological situation.

Less than a thousand students are currently infected with coronavirus, which is 0.15 percent, but that is a statistic and it is important that we promote the application of epidemiological measures through education and work with students and teachers, but also raise awareness of the need to deal with this plague, and the best way to fight and win is a vaccine, said Branko Rui.

Minister Ruzic told TV Prva that the media is creating an image of "extreme views of both sides", which, he says, do not exist.
"We were not against what the medical part of the Crisis Staff is proposing, they are the most referenced and most invited to assess the epidemiological situation, we opened all options and made a decision. There are no two sides," Ruzic said on TV Prva.

Ruzic said that he invited the representatives of the Crisis Staff to meet on Thursday morning within school team.

27 people died.
There are 142 patients on respirators.
There are 3.057 people in hospital.
In the last 24 hours, 21.163 samples were tested, and 823.161 infected people have been confirmed since the outbreak of the pandemic.

He pointed out that he hopes "that we will be in the green on the largest part of the territory of our country".

The most important topic of the new session is the start of the school year, and the introduction of COVID passes will be discussed, primarily for going to cafes and bars.
"Preserving the health of all of us is the priority of all priorities," Ruzic said.

He expressed expectations that the school year will start in a regular way, emphasizing the importance of greater vaccination coverage.
"I think it is in the interest of children and parents, as well as educators and extracurricular staff, and we must approach it very responsibly," Ruzic told TV Prva.

The Minister of Education, Branko Rui, says for RTS that the educational system is ready and that it was not a place where the virus was transmitted thanks to the responsibility shown by the children and the teaching staff. He points out that there is no reason not to conduct a small graduation exam this year.