Romanian-Russian tennis duo Monica Niculescu/Margarita Gasparyan qualified on Monday for the women's doubles quarterfinals of the Bronx Open (WTA) tournament in New York, with prizes worth 250,000 US dollars, after defeating the pair made up of Taiwanese Su-Wei Hsieh /Yu-Chieh Hsieh, with a score of 6-1, 7-5. The pair managed to win in only 64 minutes.

CHARLESTON - Serbia's Jelena Jankovic and Aleksandra Krunic have been knocked out of the Charleston WTA tennis tournament.

CHARLESTON - Serbia's Jelena Jankovic has got off to a successful start at the Charleston WTA tennis tournament after beating Russian Ekaterina Alexandrova 6-0, 6-4 in the opening round.

Jankovic - Serbia's top-ranked female tennis player, who won the tournament in 2007 and reached the final in 2013 - will next face Australia's Samantha Stosur, against whom she is 7-2 head-to-head. 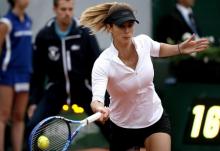 When the match was originally suspended on Sunday evening due to rain, Radwanska was leading 6-2, 3-0.

This is her first-ever success against Stosur which adds 55 points for her in the ATP ranking. 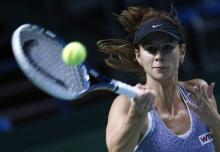 Bulgaria's No.1 female tennis player Tsvetana Pironkova won her match against Madison Keys (USA) in the second round of the women's singles competition at the Sydney Apia International tournament.

The score was 4:6, 4:1 when the American retired after suffering an injury to her right shoulder, electronic daily Dnevnik reports.

The 2014 Garanti Koza WTA Tournament of Champions starts in Sofia's Arena Armeec on October 28 and ends on November 2.

This is the first Wimbledon mixed doubles trophy for the experienced 38-year-old Zimonjic, two-times champion in the men's doubles competition.

LONDON - Serbia's Nenad Zimonjic and Australia's Samantha Stosur advanced to the quarterfinals of the mixed doubles event at Wimbledon, after defeating Eric Butorac of the United States and Hungary's Timea Babos 2-6, 6-2, 8-6 late on Wednesday.

After losing the first set, the Serbian-Australian pair found the right rhythm to come back and secure their spot in the quarterfinals.