The White House is announcing that the Treasury Department is imposing sanctions on two Turkish officials over a detained American pastor who is being tried on espionage and terror-related charges. 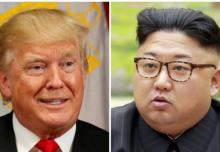 On Wednesday, Kudlow and the White House confirmed the economist and senior CNBC contributor accepted the post of National Economic Council director. The president offered Kudlow the job on Tuesday night after other conversations between the pair on Sunday and Monday.

The top House and Senate Democrats said on Sept. 13 they had reached agreement with President Donald Trump to protect thousands of younger immigrants from deportation and fund some border security enhancements - not including Trump's long-sought border wall.

The United States President Donald Trump insisted on Aug. 15 that left- and right-wing extremists became violent during a weekend rally by white nationalists in Virginia, reigniting a political firestorm over U.S. race relations and his own leadership of a national crisis.

White House communications director Anthony Scaramucci has been removed from his job after just 10 days in a move that has only increased the sense of chaos at the heart of the Trump administration.