Namely, the report calls on Serbia and Kosovo to reach an agreement on the normalization of relations "based on mutual recognition". Part of the sentence on mutual recognition was not in the draft report, but was added through an amendment submitted by Lucas Mandl, a member of the European People's Party (EPP).

Ahead of the Christmas holidays, Austria shut its shops, restaurants and festive markets on Nov. 22, returning to lockdown in the most dramatic COVID-19 restriction seen in Western Europe for months.

Schallenberg will hold talks with the EU leadership in Brussels today.
With this visit, he wants to show that he is a "convinced European" and that he has a pro-European attitude.
In Brussels, he will meet with European Commission President Ursula von der Leyen, as well as EU Council President Charles Michel.

Austria's Conservative Chancellor Sebastian Kurz resigned on Saturday to save his coalition government from the brink of collapse, as the Greens' junior coalition partner put the request as the only possible condition for keeping the coalition after Kurz became the target of investigation on suspicion of corruption, reports Reuters.

Austria's Sebastian Kurz on Oct. 9 announced he was stepping down as chancellor following pressure on him to resign after he was implicated in a corruption scandal.

His announcement in a televised media statement caps a spectacular rise in politics and a tumultuous four years as chancellor, in which his government already collapsed once.

Austrian Chancellor Sebastian Kurz pointed out today, before the EU-Western Balkans Summit on Brdo near Kranj, that the Western Balkans need a true and sincere European perspective.

President of Serbia presented to Austrian Chancellor Sebastian Kurz the Order of the Republic of Serbia on the ribbon, for merits in improving relations with Serbia and the entire region of the Western Balkans.

All countries should realize and fulfill their responsibilities with regards to the global refugee issue, Turkey's parliament speaker said on July 28. 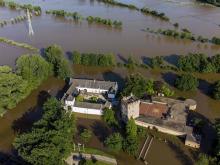 Chancellor Angela Merkel is to visit flood-ravaged areas in Germany on July 18 to survey the damage and meet survivors, after days of extreme rainfall in western Europe left at least 183 people dead and dozens missing.