Montenegrin troops were involved in besieging the Croatian city of Dubrovnik in 1991. Photo: Wikimedia Commons/Bracodbk.

From their home on a hill, they saw buildings burning. At sunset, a battalion of Serbian police surrounded people's houses.

Krasniqi's eyes filled with tears as he recalled the moment when troops seized his brothers Pashk and Mark and his uncle Pjeter.

The majority of the victims' bodies were not found for years afterwards. The remains of Limani's brother Luan, who was 21 when he was killed, were found in 2014 in a mass grave near Prizren, but three victims are still missing.

Vucic was hardly a liberal, democratic, pro-European figure to begin with, so pronouncements about the demise of European solidarity from a man who spent most of the 1990s and 2000s in the ranks of the Serbian ultra-nationalist movement, and who was Slobodan Milosevic's Minister of Information, should be taken with a moose-sized saltlick.

Hoxha, who spends her time drawing, creating animation and working at a local all-female design studio, launched her animated short film, 'Kush mytet kapet per shkume' ('The One Who's Drowning Holds on to the Foam'), in December 2019.

"It was a day for conscience and responsibility," Termkolli told BIRN.

Kosovo's autonomy as part of the Yugoslav federation was granted in 1974 under the leadership of Josip Broz Tito, giving it almost the same rights as Yugoslavia's six republics. Fifteen years later, this was being reversed. 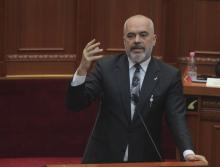 The Association of Journalists of Kosovo, AJK, has criticised Albania's Prime Minister Edi Rama for posting his agreement on Facebook with an Albanian academic who has accused Kosovo media outlets of spreading hate speech against Albania.

Jovan Dimitrijevic, who was in charge of logistics for Arkan's paramilitary unit, told the retrial of Jovica Stanisic and Franko Simatovic at the Mechanism for International Criminal Tribunals in The Hague that weapons for the unit's wartime activities were supplied by the Yugoslav People's Army, not the Serbian State Security Service.