Republican Sen. Lamar Alexander of Tennessee will oppose calling more witnesses in President Donald Trump's impeachment trial, all but dashing Democratic efforts to hear more testimony and boosting odds the Senate will vote imminently to acquit without new testimony, in a matter of days.

The latest attempt to repeal the Obama-era healthcare act has failed after a dramatic night in the US Senate, reported BBC.

At least three Republicans - John McCain, Susan Collins and Lisa Murkowski - voted against the bill, which needed a simple majority to pass.
President Donald Trump said the three had "let the American people down".

In a stinging blow to President Donald Trump, U.S. Senate Republicans failed on July 28 to dismantle Obamacare, falling short on a major campaign promise and perhaps ending a seven-year quest by their party to gut the healthcare law.

The Senate blocked the latest Republican attempt to repeal Obamacare in a dramatic floor vote early Friday morning, yet again stalling — for now — the key campaign goal that eludes the GOP six months into the Trump administration.

The US Senate voted 51-50 Tuesday to proceed with a debate on Republican plans to repeal Barack Obama's health care reforms, according to France24.

The vote was a victory for President Donald Trump, who spent weeks cajoling, strong-arming and warning Republicans to get on board with his effort to overhaul Obamacare.

Republicans in the U.S. Congress were in chaos over healthcare legislation after a second attempt to pass a bill in the Senate collapsed late on July 17, with President Donald Trump calling for an outright repeal of Obamacare and others seeking a change in direction toward bipartisanship. 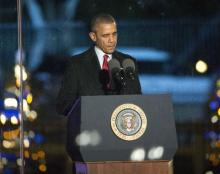 After five years of failed attempts, the U.S. Senate Republicans on Dec. 4 passed a symbolic partisan bill to gut President Barack Obama's signature healthcare reform law, but the effort has already been condemned to death by Obama's plans to veto it.