Japan does not currently have a specific answer to Bulgaria's idea of ​​producing Japanese cars. June Saito, the spokesman for the first diplomat of the Asian country, said at a media briefing.

Bulgaria hopes a Japanese carmaker will invest in it. Japan's investments in Bulgaria have been the focus of talks between Prime Minister Boyko Borissov, Foreign Minister Ekaterina Zaharieva and Japan's first diplomat Taro Kono.

Japan's Foreign Minister visits Bulgaria at the invitation of Deputy Prime Minister Zaharieva. This is the first visit at this level in 12 years.

Prime Minister Boyko Borisov met with Japanese Foreign Minister Taro Kono. In the course of their conversation in the Council of Ministers, Prime Minister Borissov noted that Japan is a priority partner and a traditional friend of Bulgaria, the government information service announced. 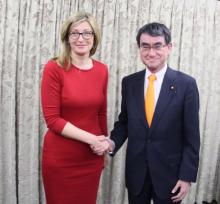 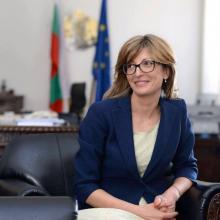 Our Foreign Minister will hold a number of meetings in the Land of the Rising Sun, reported NOVA TV.

Minister of National Defence Mihai Fifor is going to pay an official visit to the Hashemite Kingdom of Jordan over April 28 - May 2, to participate in the "Aqaba Process" reunion, reads a release on Saturday remitted to AGERPRES by the Defence Ministry&#39;s press office. 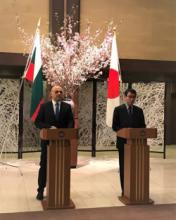 Japanese Foreign Minister Taro Kono has said he will pay an official visit to Turkey on Dec. 28.

Russian Foreign Minister Sergei Lavrov, who is in New York for the 72nd General Assembly of the United Nations, met with his Japanese counterpart Taro Kono and said that the tense situation on the Korean Peninsula requires all sides of the region to constantly interact with one another and look for a way out of the crisis, writes Russian newspaper Moskovski Komsomolets.