The organizers of the Golden Globes on July 16 banned its members from receiving gifts and free trips from movie studios and TV networks seeking to clinch awards for their shows and stars.

The movie, starring Tom Cruise as Ethan Hunt, will resume shooting on 14 June 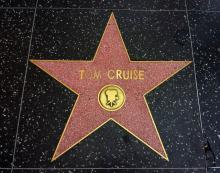 Hollywood giant Paramount Pictures halts a planned three-week "Mission Impossible" shoot in Italy because of a coronavirus in Italy, AFP and Reuters reported.

The star of the series Tom Cruise has not yet traveled to Italy and does not intend to go there under the current circumstances.

Renowned American director Quentin Tarantino will release his ninth film on August 9, 2018, when is the 50th anniversary of the murder of actress Sharon Tate, the DPA reported.

On that date, half a century ago, Roman Polanski's wife, who was in an advanced pregnancy, was barbaric slaughtered by the followers of Charles Manson's sect.

Hungarian police began an investigation against the Scientology Church, media reported in the country. The representation of the church in Budapest was searched by 50 policemen. There are alerts for committed crimes, including misuse of personal data. So far, no details have been provided about the operation.

The most successful stars in Hollywood last longer because they are able to combine talent, versatility and hard work ethic. They manage to appear in hit after hit across the span of their careers, despite some inevitable set backs.