32 people died.
26.008 people were tested.
According to the latest data, there are 167 patients on respirators, while 3.621 people were hospitalized.

"This is a marathon"

One of the priorities will be the preparation of the European Union for possible new crises in the future, said the head of Slovenian diplomacy, Ane Logar.
In a statement for the Slovenian media, Logar said that the role of the state presiding over the EU Council is to try to harmonize and propose compromise solutions for legal proposals and various topics.

At the moment of strained relations with Russia, some EU members, with their defending the Russian Nord Stream gas pipeline, further deepen the divisions in Europe and in the transatlantic partnership, writes the EUobserver portal, as EURACTIV reports. 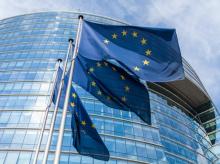 They add that additional EU funds have been provided for that purpose, and Brussels calls on the United States to reconsider the decision to cut ties and finance the World Health Organization.

The virtual summit, organized by the EU Presidency of Croatia and chaired by European Council President Charles Michel, will be held from 4.30 pm to 7.30 pm.

In her address to the EP, she called for the urgent establishment of a "Marshall Plan for Europe", primarily through the EU budget.
In her speech on the EU response to the COVID-19 pandemic, Ursula von der Leyen before the European Parliament expressed her condolences for the "tens of thousands of victims" of coronavirus in Europe.

EU Enlargement Commissioner Oliver Varhelyi said today that the European Commission is allocating € 3.8 billion to the Western Balkans and its EU east and south neighbors to help fight the coronavirus, according to BGNES.

China will send more than 2 million protective masks to the European Union after Europe becomes the epicenter of the coronavirus pandemic. This was announced today by the President of the European Commission, Ursula von der Layen, quoted by France's press.

European Commission President Ursula von der Leyden announced that Greece will receive an additional 700mn euro in EU aid in order to confront the mounting migrant and refugee crisis at its eastern land and sea borders.

But we must take care not to allow grim predictions to become self-fulfilling prophecies.