A deputy governor of the southern province of Hatay has shot his mother and brother dead in what is believed to be a family feud.

Tolga Polat killed his mother İkbal Polat and brother Altuğ Polat on Aug. 11 when the family gathered to discuss an inheritance sharing issue at their home in the Seyhan district of Adana province.

New police chiefs have been assigned to five provinces across Turkey, including the metropolis Istanbul, according to a presidential decree published on June 16 in the Official Gazette.

Security forces in Adana province began inspections on the six suspects, whose addresses were surrounded and searched during the operations.

The suspects were taken to police headquarters following health controls.

Güçlü's move was announced by her agency Tagar Sports Management on Friday.

Water frogs are in danger of becoming regionally extinct in parts of Turkey, where they are native, due to over-harvesting for human consumption, scientists have warned, according to the British daily Independent.

The residents of the southeastern province of Mardin practicing self-isolation rules due to the coronavirus outbreak are organizing on social media and flying kites from rooftops at certain times every day.

Those under the age of 20 and over 65, banned from leaving their houses to curb the spread of the virus, are especially among those flying the kites. 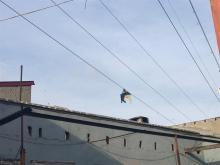 Kites that would normally dot the skies of the southern province of Adana with the arrival of spring will not be flying any more, after a decision made by the Adana Governor's Office.

Those under the age of 20 and over 65, who could not go out due to the COVID-19 measures taken, had started flying kites from the roofs of their homes.

A stem cell found for a three-year-old leukemia patient waiting for transplantation in the southern province of Adana was brought to Turkey from Greece as a result of the efforts of the Health Ministry.
The son of the Şengezer couple living in Adana, Kuzey Deniz, was hospitalized last year after sudden fever.

More than 3,000 Turkish nationals were repatriated from cities around the world April 23 as part of an initiative by
Ankara amid the coronavirus pandemic.

After routine health checks were coordinated by the Disaster and Emergency Management Authority (AFAD), they were brought to dormitories in several cities in Turkey to be quarantined.

Acting on a tip-off, provincial gendarmerie command teams carried out raids in three different locations in Seyhan and Cukurova districts, said the sources, who asked not to be named due to restrictions on speaking to the media.