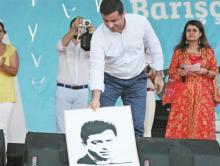 Presidential hopeful Selahattin DemirtaÅ, while speaking to broadcaster CNNTÃ¼rk in the southern province of Adana on Aug. 6, said he and his family have suffered from several instances of racism in the past due to their Kurdish identity.

A woman has applied to the Turkish Constitutional Court for the postponement of her six-year prison sentence, on charges of âmembership to an armed organization,â to avoid entering jail with her five-months-old baby.

Six police officers, including two police chiefs, were removed from duty on July 25 as part of the ongoing wiretapping investigation in Turkeyâs southern province of Adana.

Nine police officers, eight of whom are on active duty and one of whom is retired, were arrested as part of the investigation on April 8. All were released five days after their arrests.

The 21st Adana Golden Boll Film Festival will be held this year from Sept. 15 to 21 with activities related to cinema and more.

Famous director Reha Erdem will head the jury of the National Feature Film Competition at this yearâs festival.

Police have demanded prosecutors to press charges on 28 protesters, detained for their participation in several demonstrations between August 2013 and April 2014 in the southern province of Adana, with âtrying to disprove the prime ministerâs statements during the Gezi Park incidents.â

In a report prepared by two opposition deputies, shocking incidents were revealed in the Juvenile Ward of the Adana Ceyhan Prison, which included rape; while guards at the prison complained of prisoners throwing razor blades and pouring boiling water on them.

New footage has emerged showing a raid, which took place last January in the southern province of Adana, on trucks belonging to the Turkish National Intelligence Organization (MÄ°T) bound for Syria.

Since the raid, a court has accepted an indictment on spying charges against the 13 soldiers who stopped and searched the trucks.

Two men have been detained in the southern Turkish province of Adana attempting to shoplift, while wearing the same T-shirts they stole before.

One of the men, identified as ÃaÄlar S., was detained after he tried to leave a supermarket in the Seyhan neighborhood with an expensive bottle of alcoholic drink hidden under his T-shirt.