Ukrainian Ambassador to Ankara Andrii Sybiha has slammed the Mediterranean province of Antalya's Alanya district municipality for playing Katyusha, a patriotic Soviet song, during a roving concert in the town from a bus to mark May 9 Victory Day, when the Soviets defeated Nazi Germany in 1945.

Turkish Agricultural Minister Bekir Pakdemirli said that 23 fallow deer that will be released into nature in the western Manavgat and Köyceğiz districts are now in an adaptation process.

As coronavirus lockdowns around the world are easing, the resort town of Kalkan on the Mediterranean coast is drawing the attention of tourists who want to holiday in isolation.
The town of Kalkan in the Mediterranean province of Antalya attracts the attention of those who want to spend an isolated holiday in the midst of nature as it has thousands of villas. 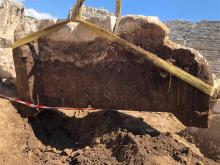 An excavation team in the ancient city of Patara, located in Turkey's Mediterranean coast, unearthed an inscription in an ancient theater.

Turkey has been holding talks with the U.K, Russia and Germany ahead of the tourism season to lure holidaymakers to the country as Ankara anticipates a revival in tourism activities in July.

Travel writers of British The Guardian newspaper have shown Antalya's Çıralı and Patara beaches among the cleanest beaches in Europe. There are also three more Turkish beaches on the list. 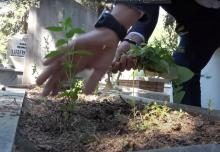 A man, who runs a company that takes care of and looks after tombs, is offering a virtual tour of cemeteries in the southern province of Antalya as people cannot go out because of restrictions due to the coronavirus pandemic.

When the first excavations in the ancient city of Patara began in 1988, archaeologists and academics were using wheelbarrows to carry their digging items and their findings. Now that they found a trove of ancient relics, they say it's time for conservation.

Residents of a lake island in Turkey live a mostly isolated live, but most importantly they are corona-free as the world grapples with the novel coronavirus.

Mada Island is the biggest of 32 islands inside Beyşehir Lake in Isparta and Konya provinces in southwestern Turkey. It is 250 kilometers from Turkey's tourist hub of the province of Antalya on the Mediterranean coast.

Thanks to strict compliance with social isolation rules and tight controls against the spread of the novel coronavirus,
no cases of the disease have been encountered in Turkey's coastal Mediterranean town of Kaş.