At a ceremony in the 162nd Squadron of the US Air Force, Captain Alexander Velinov was recognized as the first Bulgarian pilot to undergo the initial training course for flying an F-16.

Although the ceremony was modest and informal, the results were enormous.

Turkey is an indispensable ally, anchored in NATO and an important partner in a region in constant flux, the new ambassador of the United States to Ankara said on Jan. 26. 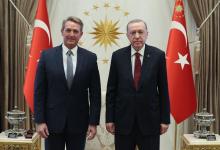 Flake, a former Republican senator, arrived in Turkey on Jan. 7 , replacing David Satterfield, who will serve as the U.S. special envoy to the Horn of Africa.

Nearly two years into the COVID-19 pandemic, the origin of the virus tormenting the world remains shrouded in mystery.
Most scientists believe it emerged in the wild and jumped from bats to humans, either directly or through another animal. Others theorize it escaped from a Chinese lab.

Bob Dylan has been telling stories through songs for 60 years. But recently America's master lyricist has also captured moments in a new series of paintings that, just like his songs, are intimate and a bit of a mystery.

Today is a day of reflection before the second round of the presidential election. On this day, political agitation and the publication of sociological data on the attitudes of voters is prohibited. The ban lasts from 00.00 today to 20.00 on election day on Sunday.

Archaeologists in Morocco on Nov. 18 unveiled what they said was the oldest jewelry in the world, perforated seashells dating back as much as 150,000 years.

The shells, assumed to have formed necklaces and bracelets, were discovered in the Bizmoune cave near the coastal resort of Essaouira.

As we enter the second month of the new school year and given the high number of COVID-19 cases, many reasonable questions arise regarding the protection of our children against COVID-19.

Well-known actors of Arab cinema, such as Salah Bakri, Ali Suleiman, Sara El Debuch and Husam Chadat, took part in the production, which tells about the Syrian war.