A more than 3,000-year-old gold signet ring that was stolen from an Aegean island in World War II, crossed the Atlantic, was bought by a Nobel Prize-winning Hungarian scientist and ended up in a Swedish museum has found its way back to Greece.

A marble bust that a Texas woman bought for about $35 from a Goodwill store is temporarily on display at a San Antonio museum after experts determined it was a centuries-old sculpture missing from Germany since World War II.

The bust, which art collector Laura Young found at Goodwill in 2018, once belonged in the collection of King Ludwig I of

Archaeologists in Sardinia have unearthed the torsos of two more limestone statues of boxers within the Iron Age necropolis of Mont'e Prama, Italy's culture ministry said on May 7.

The archaeologists, who have been working in this field for a few years, say the discoveries confirm the earliest known practise of agriculture near the lake.

The discoveries have attracted the attention of the wider community, and the Albanian community living in Switzerland has organised a meeting with one of the best-known archaeologists on the team to discuss them. 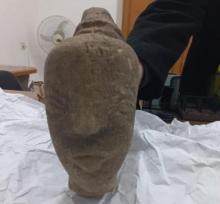 The Ministry of Tourism and Antiquities said the 22-centimeter tall limestone head is believed to represent the Canaanite goddess Anat and is estimated to be dated to around 2,500 B.C.

Göbeklitepe, a 12,000-year-old Neolithic archaeological site in southeastern province of Şanlıurfa, may have been made by aliens, the city's mayor says.

"The statues in Göbeklitepe depict something other than humans. They seem to be coming from somewhere else. They remind me of aliens," Zeynel Abidin Beyazgül told daily Milliyet on April 25.

An 1,800-year-old marble bathtub, which was about to be sold by smugglers in the western province of Aydın's Karacasu district, has been delivered to the Aphrodisias Museum Directorate.

It was reported that the bathtub, with the lion's head reliefs on it, is unique in Turkey as it is made of marble entirely.

Archaeologists have found a sewer system believed to be 1,800 years old during excavations in the ancient city of Mastaura in the western province of Aydın's Nazilli district.

Experts have been working on the site, located inside a narrow valley and some 3 kilometers north of Nazilli, for the past two years.

Ancient motifs like bullheads considered the symbol of power in ancient times, have been found on the walls of Sinop Castle.

Within the framework of the City Square Project, initiated to bring the historical beauties of the northern province of Sinop to light, the historical richness of the city started unfolding after the buildings in front of the castle walls were removed.

Decorated glazed bricks almost 3,000 years old are on display at Iran's National Museum after a four-decade search disrupted by war and an international legal battle.