An exhausted Senate narrowly approved a $1.9 trillion COVID-19 relief bill on March 6 as President Joe Biden and his Democratic allies notched a victory they called crucial for hoisting the country out of the pandemic and economic doldrums.

He escaped Communist-era Czechoslovakia in a homemade hang glider in 1984, then founded a propeller company in California in 1986

California on March 5 paved the way for Disneyland, other theme parks and outdoor stadiums to welcome guests sooner than expected as it relaxed reopening criteria following a sharp decline in Covid-19 cases and pressure from operators.

The Perseverance rover ventured from its landing position on March 4, two weeks after setting down on the red planet to seek signs of past life.

A farmer in the Central Anatolian province of Çorum has agreed to sell a 68-kg "meteorite," which he found on his field two years ago, to a buyer in the United States for $180,000.

Farmer Mutlu Yılmaz came across a large rock while planting chickpeas in his field in the village of Gerdekkaya in April 2019.

The United States launched airstrikes in Syria on Feb. 25, targeting facilities near the Iraqi border used by Iranian-backed militia groups. The Pentagon said the strikes were retaliation for a rocket attack in Iraq earlier this month that killed one civilian contractor and wounded a U.S. service member and other coalition troops. 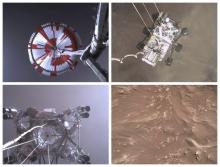 NASA on Feb. 22 released the first high-quality video of a spacecraft landing on Mars, a three-minute trailer showing the enormous orange and white parachute hurtling open and the red dust kicking up as rocket engines lowered the rover to the surface.

The footage was so good, and the images so breathtaking, that members of the rover team said they felt like they were riding along.

The recent heavy, and long by Greek standards over the last decades, snowfalls left behind rubble and a host of citizens without electricity, heat, and water.

A Turkish photographer was announced the winner of a category of the 2020 International Photography Awards over the weekend.

Selected as the winner of the "Discovery of the Year 2020" contest F. Dilek Uyar became the "Emerging Photographer of the Year" in the contest of the California-based International Photography Awards with her work titled "In Epicenter of COVID-19."