NASA on Wednesday launched a satellite designed to track carbon dioxide, a leading greenhouse gas that is responsible for global warming.

The Orbiting Carbon Observatory-2 took off aboard a Delta 2 rocket at 2:56 am Pacific time (0956 GMT) from Vandenberg Air Force Base in California.

President Barack Obama said denying climate change is like arguing that the moon is made of cheese, as he issued a call for action on global warming to graduates of the University of California, Irvine.

Apple, seeking to bolster its position in the hotly contested online music sector, said Wednesday it was buying Beats Music and Beats Electronics in a much-hyped deal worth $3 billion.

Google has started building its own self-driving car that it hopes to begin testing as early as this year.

"They won't have a steering wheel, accelerator pedal, or brake pedal... because they don't need them. Our software and sensors do all the work,"  the company said in a blog post Tuesday night. 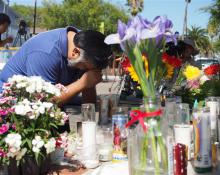 A campaign on Twitter denouncing misogyny has gathered thousands of followers after a bloody rampage in California by a 22-year-old virgin who said he was motivated by hatred of women.

A gunman has killed six people in drive-by shootings in the Californian city of Santa Barbara, Friday night.

The shootings took place near the University of California-Santa Barbara, where two-thirds of the residents are students, the BBC reports.

Seven more people were wounded late on Friday in the town of Isla Vista near the campus of the University.

44% of Bulgaria's population harbors anti-Semitic attitudes, according to a survey of US organization Anti-Defamation League.

The Anti-Defamation League commissioned First International Resources to research attitudes and opinions toward Jews in over 100 countries around the world.

The documentary was filmed in a number of locations, including Oakland, California, Santa Fe, New Mexico and Chicago, Illinois. The filmmakers also visited a number of sites in Colorado, where the Ludlow Massacre took place. These included Denver, Fort Collins and Colorado Springs.

Experts warn of potential stronger earthquakes in Chile, after an 8.2 magnitude quake killed at least 5 people on Tuesday night.

"This magnitude 8.2 is not the large earthquake that we were expecting in this area", California geophysicist Mark Simons told CNN.