Romanian officials have expressed support for the government of neighbouring Moldova after Moscow last week announced the fruit import ban, which follows similar sanctions on the country’s cattle, beef and wine.

Fruit is one of poverty-stricken Moldova’s major export products, raising fears that the country’s economy could suffer.

Prime Minister Victor Ponta said on Tuesday in Sibiu that Romania backed the extension of support to Ukraine, as well as the imposition of sanctions on the Russian Federation, of which he said that it is morally and politically responsible for the terrorist attack on a civil aircraft on Ukraine's territory.

Romania's Foreign Minister Titus Corlatean will participate in a Foreign Affairs Council (FAC) meeting on Tuesday, where the current situation in the region will be discussed, as well as the fact that a Malaysian Airlines aircraft was downed on Ukraine's soil, at the border with the Russian Federation.

BELGRADE – The 21st edition of the European Film Festival Palic will open Saturday evening by the screening of White God by Hungarian director Kornel Mundruczo, winner of the Un Certain Regard prize at Cannes this year.

Prime Minister Victor Ponta said on Thursday he feels very good as a prime minister, and regardless of the public position he will hold as of November, he will remain a big advocate of Serbia's integration and of the other states in the region aspiring to join the EU. 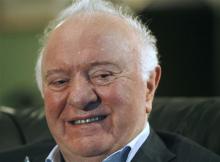 Eduard Shevardnadze, an ex-president of Georgia and former Soviet foreign minister, died on July 7 after a long struggle with illness, his personal assistant said.

Shevardnadze, who was 86, played a vital role in ending the Cold War as Soviet foreign minister, went on to lead his native Georgia in the stormy early years after independence.

Moscow appeared to show its unhappiness by imposing a ban on cattle and beef imports from Romania, a move that leaders in Bucharest said was politically motivated.