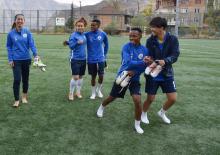 Two Africans, who were transferred to the eastern province of Hakkari's women's football club playing in the Turkcell Women 1st League, have said they are happy to be living in the border city.

"I love Hakkari and its people. They are so hospitable," 24-year-old Kenyan midfielder Mwanalima Adam Jereko told state-run Anadolu Agency. 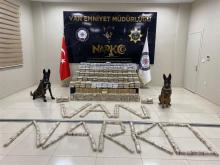 The terrorists "infiltrating" the border of Çukurca district of southeastern Hakkari province were "captured dead" in a land operation backed by an armed UAV of gendarmerie forces and close air support, Minister Süleyman Soylu said on Twitter.

The ammunition cache was seized Tuesday by the local gendarmerie forces and soldiers in the countryside of the southeastern Hakkari province, said a statement by the governor's office.

Thousands of women pushed pedals across the world as part of a global-scale campaign to give more visibility to women in society and to demand cycle-friendly cities.

Turkey is adding 242 kilometers more to its security wall along the border with Iran in the eastern province of Van to curtail migration, Interior Minister Süleyman Soylu said on Sept. 15.

"We will add another 242 km to the 221 km we have erected so far at our borders with Iran in the east," he said at a migration board meeting.

In a bid to make their job easy, villagers in the southeastern province of Hakkari's Yüksekova district have come up with an innovative method of using a 3,000-meter-long zipline to transport hay bales collected from mountains to their villages during the summer months.

Turkey has taken additional security measures on its border with Iran following developments in Afghanistan that could possibly create a fresh influx of migrants.

In one operation, police in İpekyolu district of eastern Van province captured more than 265 kilos (584 pounds) of heroin and arrested two suspects on allegations of drug trafficking, according to a statement by the provincial police department.

An expedition organized by the Turkish Geographical Association has revealed the extend of the impact of climate change on the glacier on Mount Cilo in the southeastern province of Hakkari.